What is an Antenna?

The antenna is a device that is used for transmitting and receiving signals, which represents some information. It was invented in the year 1888 by Germans. They are designed for wireless communication and have the capability to propagate both radio and microwave signals. Basically, it is just like a conductor and the resonant device, which works on a very narrow frequency band. 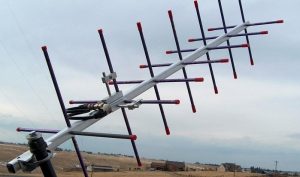 They are categorized into different types according to their functionality and shape. Some of the well-known types of it are as follows:

Yagi-Uda:   Yagi-Uda is the directional antenna and is also known as the Yagi It is the most common type of antenna and is used in old household appliances like TVs and Radios. In this type, many numbers of parallel elements (half-wave dipoles) are arranged in a single straight line. It is used as a bridge in TV reception.

Aperture: An antenna with the opening that is capable of radiating the energy is known as the Aperture antenna. The opening of this is known to be the aperture. These types of antennas have the capability to send and receive signals in all directions, and the radiation is also more significant than the two-wire transmission line.

These kinds of antennas are used in surface search radars and microwave applications. Horn antenna is a well-known aperture antenna.

Reflector: It is an antenna that consists of one or more reflecting surfaces with a system that transmits or absorbs the electromagnetic waves. These antennas are primarily used in satellite communication and remote sensing. Parabolic reflectors and corner reflectors are examples of reflector antennas.

Wire: It is the radio that is made up of long wire. The length of the wire antenna has no relation with its wavelength. The cable is connected to the transmitter or the receiver via an antenna tuner to help catch or transmit the signals. Wire antennas are known for their portability and ease of installation. The types of the wire antenna are Dipole antenna, Helix antenna, and Monopole antenna.

Lens: The electromagnetic lens is embedded in this antenna. It uses the convergence and divergence property of the lens to receive and transmit signals, respectively. This type consists of a dipole antenna with a lens in it. The size of the lens is inversely proportional to the frequency of the signal that is to be transmitted or received.

The lens converges the signals at the focal point where the feeding antenna is placed. These types of antenna are preferred for high-frequency transmission, where high bandwidth is required. Lens antennas are mainly of two types

Here are a few of the properties of this

Gain: The intensity of the waves transmitted by the antenna is said to be the gain. The designing of this is done in such a way that its radiated power is maximum in the required direction, then the other, which introduces the concept of directivity. The antenna gain is mathematically expressed as

Gain = (Directivity) * (Efficiency)
Here the directivity of the device represents the concentration of it’s radiation pattern in a specific direction. The efficiency takes into account the loss due to any faults like the manufacturing faults, resistance, VSWR, etc.

Bandwidth:  The bandwidth of the device is a range of frequencies on which it can operate correctly. It is the range in Hz for which the SWR is less than 2.1.

Effective length: This length is measured for both receiver and transmitter. By this factor, the efficiency of this is measured. The free space length in any conductor is referred to as the effective length.

The effective length can be measured by the formula:

The radiation pattern of the device is referred to as the polar diagram, and it is the most important property of the antenna. This plot describes the power field strength in the different angles on the vertical and horizontal planes.

The energy that enters in it is converted into the Electromagnetic waves. The signal’s current radiates these waves. The conversion of the magnetic field into the electric field is done by applying Faraday’s law.

It is the main component of the wireless communication system. Each type of it is specific for the task and has its own pros and cons. All the communication that takes place around you probably involves an antenna in it. Modern devices are also used in search of radars and defense radars. These devices also play a huge role in curing breast cancer, which is a relatively new area of research.