A transistor is an electronic component that is used in switching and for amplification of the electrical signals. Transistors had drastically revolutionized the world before transistors vacuum tubes were used. These tubes were not only bulky, but they also consumed a lot of power, resulting in a less efficient overall system.

On the other hand, transistors are a lot compact in size, and they consume way less power than a vacuum tube. Modern transistors have a size in nanometers, and there are billions of them on a signal chip. Transistors can act as a switch with no moving parts; also, they can amplify a weak signal. Let us now discuss the basics of transistors.

Modern transistors are made up of semiconductors like silicon. In the case of silicon, each of the atoms is bonded with four neighboring silicon atoms. There are no free atoms in the outermost shell for the conductance of electricity. So an atom of phosphorus is injected between those silicon atoms, which creates a free electron in the system, and this process is known as N-type doping.  Another type of doping is the P-type doping in which a free hole is created/injected for the movement of electrons. Doping increases the conductivity of the semiconductor.

There are three terminals of a transistor

Basically, there are two types of transistors

Both of them have their own functionality with certain pros and cons. In BJTs, a small amount of base current is responsible for controlling the large current at the collector end. In FETs, there are also three terminals, namely gate, source, and drain. For these types of transistors, the gate voltage controls the flow of current through the source and drain. 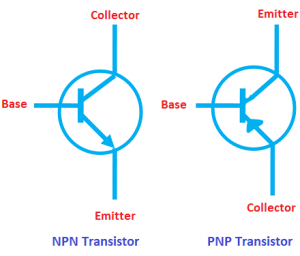 The figure above represents both NPN and PNP transistors. The arrow shows the direction of the conventional current through the transistor.

One of the most common applications of the BJT is to use it as an amplifier. Where if you apply a time-varying signal as an input, then it produces an amplified signal at the output. This amplification is done using the energy supplied by the DC power source. This process of applying a DC voltage source, which helps the transistor to function, is known as biasing.

These are the commonly used methods of biasing in BJTs

Field-effect transistors also have three main terminals named as the gate, drain, and the source. Unlike the BJTs, these transistors are voltage-controlled devices with a very high input impedance. The impendence ranges from several megaohms to much larger values, which allows a minimal amount of current to pass through them. These transistors use the electric field to control the flow of current through the source to drain. 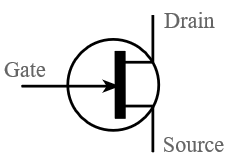 The figure above represents an N-type FET. If the arrow is directed outwards, it represents the P-type FET. The voltage supplied at the gate terminal controls the flow of current from source to drain. Due to the high impedance value, these transistors draw a very little amount of current from the circuit, which is ideal as it does not disturb the power of the circuit. FETs are further divided into two main categories, namely JFETs and IG-FETs. MOSFET, also known as Metal Oxide Semiconductor FET, is the most common type of IG-FETs.

FETs are ideal for applications like current limiters to limit the excessive current from reaching the load device. Other than that, FETs are also used as Multiplexers, Choppers, and phase shift oscillators. For amplification, purpose BJTs are more suitable, but for low noise amplifications, FETs are more desirable. On top of that, FETs occupy a lot less space than BJTs, so most of the electric components use FET in ICs. Another critical difference between BJTs and FETs is that the BJTs are Bipolar, and FETs are unipolar devices. This means that FETs rely on either holes or electrons for its operation where else BJTs rely on both.