Spintronics, also known as spin electronics, is an emerging solid-state device technology that exploits the intrinsic spin properties of an electron and its associated magnetic moment, in addition to the electron charge. Conventional electronic and semiconductor devices rely on the transport of electron charge carriers. Whereas, spintronics deal with spin-charge coupling in metallic systems with implications in the efficiency of data storage and transfer. Spintronic systems are of particular interest in the field of quantum computing and neuromorphic computing.

Every electron can exist in one of the two spin states: spin-up and spin-down. In other words, electrons can rotate either clockwise or counterclockwise with constant frequency around its axis. They can represent 0 or 1 in logic operations. In ordinary materials, the spin-up magnetic moments cancel with spin-down magnetic moments and therefore are of no use for spintronics. Ferromagnetic materials are needed for spintronics which can provide a surplus accumulation of different spins in a tiny region called domains. These majority-up and majority-down domains are randomly scattered and with an externally applied magnetic field will line up the domains in the direction of the electric field. 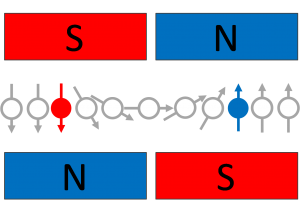 Spintronics is the driving technology behind next-generation nano-electronic devices to increase their memory and processing capabilities while reducing power consumption. In these devices, the spin polarization is controlled either by magnetic layers or via spin-orbit coupling. Spin waves, also known as magnons, can be used to carry spin current without causing heat. Spintronics is also used in the semiconductor industry to manufacture different types of transistors, lasers and integrated magnetic sensors.

There are different ways to create spin polarisation and harness spin degree of freedom in metals and semiconductors. Few important ways are listed below.

There are many spintronic based devices in the market ranging from transistors, oscillators, memory units to quantum computing. A few prominent devices are listed below.

Spintronics is at the verge of becoming a major technology for microelectronics. Many devices have started entering the market with a recent launch of magnetic memory production at a large scale. However, there is a need for further improvements in spintronic device applications, and few are noted below.