What is speech recognition?

Speech recognition is making a machine able to recognise and interpret speech. It is an interdisciplinary branch which demands knowledge of computer science, linguistics, mathematics, computing and such related fields. Although officially, it was first developed in 1952 at Bell laboratories since then, the technologies and methodology used in it have undergone a lot of waves of innovation. At present, the accuracy of speech recognition systems is at per with those of humans.  This technology today allows us to talk with our devices replacing the existing tiresome techniques of typing and clicking. Whether it is playing music, switching off lights, making a call, everything today can be done at your command, all you need to do is “speak” and they will act accordingly. This technology is a boon especially for those who are physically handicapped. It is commonly called an Automatic Speech Recognition (ASR) system.

Speech recognition is a case of pattern recognition and the basic principle of its working are as follows: 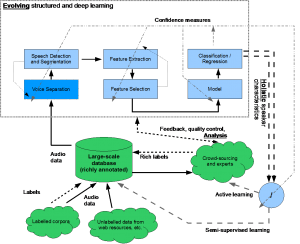 ASR varies in different forms depending upon the imposed constraints. Some of the constraints are discussed below:

Speech recognition systems are found everywhere, starting from our home to workplaces. It is cost-effective and makes life easier. Especially for those who are disabled, the ASR system gives them a new ray of hope. The list can go on but some of the applications are enlisted below: