What is Software Testing?

Software Testing is the process of double checking each and every module of software for correct functionality and performance. The Software testing phase is an essential step in the software development life cycle (SDLC) and without performing it, deployment cannot take place. Testing a software before deployment is a crucial step which shall not be missed to enhance user satisfaction and to advance the system of failure detection from a software.

Software testing is basically done in a few steps and involves a set of activities to take place to identify potential failures and evaluate the quality’s level. Because ‘To err is human’, a human’s mistakes are carried forward which transform into defects which then subsequently turn into producing failures. Bugs and incorrect applications of functions are not-picked and then software is returned back to the development team for debugging (process of eliminating the bugs from the software).

The activities performed in a software testing process are done so that the actual final product matches with the requirements elicited in the first phase of the SDLC. Any software product, be it a website, software application or a mobile application adhere to the same testing properties where each specific module is tested separately. It maps the user requirements with the actual implemented ones to make sure there are no gaps and missing requirements. There are multiple techniques to perform software testing; white box testing and black box testing. Mostly the testing activities are carried out module by module so that the recently implemented work can be tested before it merges with the rest of the work; to reduce the loss and cater maximum security. 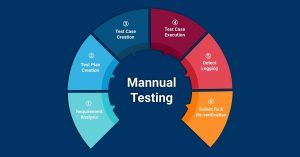 Failure due to lack of software testing:

Some of the companies follow the procedures where testing isn’t catered much as it is considered a total loss of cost and time. But here are some examples of how major companies had to roll themselves back due to the extent of loss only because of not carrying out testing procedures carefully.

Example 1: The world’s largest coffee company experienced a failure in its POS software system due to which they had to shut down 60 stores in the U.S and Canada, even attempted to serve FREE coffee because they were not able to process any transactions.

Example 2: In April 1999, the costliest failure of time occurred with the military where they launched a military satellite which failed and made a total loss of $1.2 billion.

There are numerous pros of conducting a proper testing of softwares which can lead to these plus points:

Just like the software development life cycle (SDLC), the testing phase consists of its very own life cycle known as STLC. These phases are:

There are various types of testing and basically these testing techniques move from 1-onwards as far as the order is concerned.

These were some of the most important assets of software testing which shall not be skipped at any case. Proper testing documentation shall be carried out to ensure maximum customer satisfaction and a guaranteed overall profit.