What is Regression in AI?

The mathematical approach to find the relationship between two or more variables is known as Regression in AI . Regression is widely used in Machine Learning to predict the behavior of one variable depending upon the value of another variable.

Unlike the classification models, the regression models output numeric values. It also has continuous values for both dependent and independent variables, and for the most part, Regression is classified as supervised learning.

Types of Regression in AI

Each regression technique has some assumptions that you need to fulfil before using them. Here are a few of the types ranging from famous to less known; each of them has its own pros and cons. 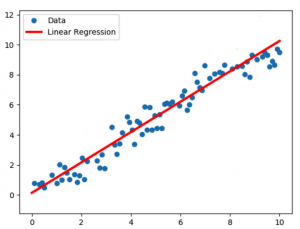 After calculating the ‘m’ and ‘c’ for the Regression, we calculate the mean square error (MSE) and minimize it using gradient descent. MSE is given by

Here ‘N’ is the number of data points, two is multiplied to facilitate when taking derivatives. This MSE is minimized, and the slope is adjusted using gradient descent.

Mathematically, this model predicts the probability of an individual variable ‘Y’ on the basis of the independent variable ‘X’. The graphical representation of Logistic Regression is similar to that of a sigmoid function. There are generally three types of logistic Regression

There is a minor difference between all three of these types. In binary logistic regression, there are two possible types of output, i.e., 0 or 1. It is more like a classification model, and 0 or 1 may represent yes/no, success/failure, etc. In multinomial and ordinal logistic Regression, there are three or more possible outcomes. The only difference is that the multinomial has an unordered type and ordinal has ordered type of outcome.

Here ‘z’ is the hypothesis, which is assumed to be

The cost function of this Regression is given as follows

Mathematically the cost function is expressed as

Here λ acts as the regularization parameter, which is always a positive number. It must be noted that there is no plenty applied to the intercept term. Only the summation of the square of the regression coefficient is affected by it.

Choosing the value for the regularization parameter (λ) is also very important. If we decide λ=0, then the plenty term will get excluded, and if the value of λ is kept high, then it will result in under-fitting. To find the optimal value, we plot the parameter against the different values of λ and select the minimum value for which the parameter is stable.

The cost function to minimize is

Constraints are as follows

We can also add a slack variable to the cost function in order to obtain better results.

By taking the square root of the variance the deviation can be calculated . In decision tree regression, the main aim is to reduce the standard deviation by segmenting the data into independent variables.

How to choose the best model?

There are many other models of Regression in AI other than the described above. But in order to choose the best one, we need to consider the following points