Prototype are the limited representation of any idea or design. These are miniature models which are created in the prototyping phase of development of any physical product. The prototyping is an experimental process which caters some and/or a part of all the requirements of the actual model, and the goal is to persist a somewhat idea of the finalized product. Prototypes are tangible and can range from paper modeling to creating mockups of application softwares. Prototypes are created keeping in mind a threshold of fidelity to be met when both the models are compared and tested. The aim of prototyping is to save time and money, and to have something to be interacted with the actual audience.

Prototyping has many advantages; it saves the developers from huge losses as errors are highlighted at the very beginning, and saves from  nit-picking errors when the project nears the deployment; that’s when both the error costs and risks are the highest; it can result in an overall downfall of the company if one product fails (such as Apple and the launch of their new iPhone). A product which is error prone from the start shall be identified as soon as possible, and prototyping is the only way. Because it creates a real life picture of the product developed-to-be, many developers use this technique for testing or user experience ideation purposes, at the point where the product is ready to be tested from actual target users. The feedback on the prototypes are recorded and the deviation from the desired product is calculated to make sure the final product meets the requirements of the users targeted.

The prototyping process is as simple as Design -> Prototype -> Evaluate -> (Approved? Ok)->(Not approved? Re-design). It’s an iterative process mostly, where each iteration possesses a new module added to the previous prototype to be tested. The types of prototypes may include screens of sketches, storyboard, PowerPoint slideshow or a video simulation etc. Some key points of prototyping includes exploring requirements, choosing among proposed alternatives and thus leading to evolutionary development. 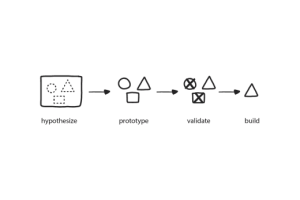 Why prototype? “It wastes time”

Some critics have argued that this specific phase is useless and a direct approach towards building the actual product shall be followed to maximize time efficiency and save costs on prototyping. But something neglected here is that these costs may be saved initially but if error arises, it may result in a long time failure and disputes may not even be held anymore.

This evaluation technique is a center for interaction design and feedback where you can test the ideas for yourself and if working in a team, can have a communication check and get all the questions answered and gain support in choosing the right alternative.

The early prototyping is done when the initial modules are set and ready to be tested. It is done when less than 40% of the project is completed and basically tests the function interface of the modules. The user experience with the interface is done and enhanced if needed. Late prototyping ensures that all modules are gathered and the product is an all-at-one module and is ready to be deployed, only then the late prototyping takes place because it ensures performance and evaluates the overall working of the product.

Carrying out a prototyping phase before deploying results in much higher user satisfaction as compared to rushing towards the end. If users are familiar with the product beforehand, it results in less sense of shock at the time of launch as it brings the users in the process early.

Levels of Fidelity in Prototyping

Fidelity is the degree to which the final product matches the type of the prototype produced. The level of fidelity may be judged upon looking at the similarities between both the product and the miniature model, the prototype. The fidelity spectrum consists of two main levels; high fidelity and low fidelity.

In this type of fidelity, the actual product created is as close to the prototype as it can be. The actual visualization and feel of the product is much similar, and the prototype can be taken as the final product as well. This type of prototype is electronically faithful as it uses the same materials the actual product has promised to use. The buttons, user interface, media utilized and all the other relevant functionality tends to be almost the same as the final product in this prototyping type. This type uses the most resources and can be expensive at times.

For example; where a final model of a car is to be built and that obviously has a metal body and contains engine etc. And to follow that same feel and look, the prototype will be made up of medals, of the same material as the final product. The fidelity will decrease if this metal is replaced with something such as wood or cardboard, as the look will be much deviated from the actual product.

For example: If a company decides to get prototypes made of their latest mobile phone which will be launched short-hand, a paper model of the phone will be a low fidelity model as it will lack the actual representation and functionality of the phone.

Other types of prototypes can be full, horizontal or vertical. In a full prototype, the miniature model may possess full functionality and performance. Horizontal is the type where the lower level, breath, of the model is specified and focused, and no back-end or lower level detail is catered such as APIs or database connectivity etc. Vertical prototyping caters a small part of the performance requirements and a fully functional final product.

Furthermore, all the tech giants prioritize prototyping beforehand instead of rushing towards the end because these big companies can’t afford a single mess-up, and hence prefer a proper testing of all the modules of their products before launching to ensure complete safety. Thus, a proper prototyping phase MUST be carried out, no matter the size of the organization; to reduce maximum loss and risk factor.