What is an Operating System Kernel?

A kernel is the core of any computer system which has full control over the system’s performance. This basic core of an operating system is always present at any time. The interaction layer between both the hardware and the software is catered by OS Kernels and it is the first program that starts up at the time of boot up. 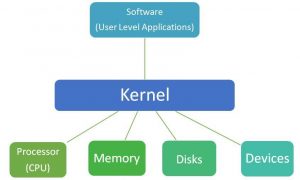 This part of the OS handles all the necessary operations such as handling the peripherals, I/O operations and selects the most suitable process to be executed next or any process which shall be temporarily blocked. OS kernel also tracks the system performance and memory load. Tasks such as memory management, task management, disk management and process management are performed by the OS. Every Operating system comes with a built in kernel so that a proper interaction between the hardware and the software can be instantiated.

Kernel runs in the background memory until the computer is shut down because it takes care of the various operations. Certain processes need to communicate with the operating system and to do that, they must first send the request to the intermediary between them which is the kernel. These requests are called as system calls which invoke the kernel so that the user’s desired operations are performed. Not everybody can access kernel data because it is loaded into protected memory of the operating system reserved for only the specified purpose, also known as the kernel space. Any application running other than kernel runs on a user space. Users usually deal with the lowest level of the kernel where the kernel communicates directly with the OS. The hardware software communication cannot be done directly due to the fact that systems only understand binary and natural language shall be converted to be interpreted by a system, and vice versa.

Kernel serves at the lowest abstraction of the OS and is the direct link between the hardware and the software layer. Some basic functions of the Kernel are: 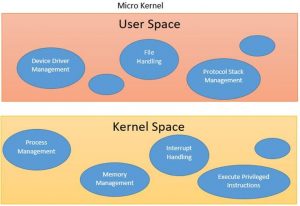 The heart of the operating system which is responsible for every task, a kernel, has various types:

Each of the types of kernels has their own pros and cons and shall be addressed accordingly, by carrying a preliminary research. No matter what the kernel, it performs the same operations but the speed and location varies. All and all, the kernel structure is the core of the operating system and no operating system can work without it.