What is Network Topology?

As the network is made up of nodes and edges, network topology is how a network’s components are arranged and linked together. Because a network can be organized in different ways, different types of topologies affect the performance of the network, based on its arrangement. Every topology has its bright and down sides, considering other underlying characteristics. Choosing the exact network topology may be reliant on other factors such as network size, goals and most importantly, the accumulated budget. This article focuses on different types of network topologies, their pros and cons, and suggests which kind shall be applied to which particular situation. 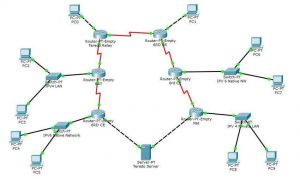 Network topology is basically how all different assets of a network such as nodes and various devices are interconnected. It can be assumed as the world map, where all the places are nodes and the roads between them are the linkages, and how different routes can be beneficial in some situations while result disturbing in other circumstances at the same time. The way these devices are connected grant the level of performance, security and integrity.

The two main approaches to creating a network topology are logical and physical. Logical representation of a network topology is much deeper, and refers to the more meaningful context such as how the data is flowing, what’s giving it a nitro boost, and what may act as a barrier if arranged in a specific way. On the other hand, the physical representation, as the name suggests deals with the physical nature of the arrangement (how the wires, devices, cables are connected), dealing with different ups and downs. 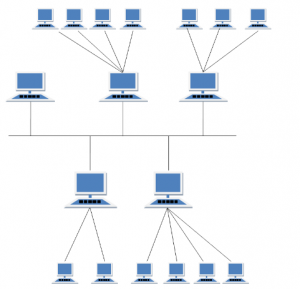 Types of Topology (Choosing between the alternatives)

There are several types of network topologies, where each type is suitable for a specific purpose. The overall network topology preference may alter depending upon the scale of your organization, or the goal you’re attempting to attain. Changing the type of the desired network may not only cut down the infrastructure costs but make sure the network acts rather much efficiently and pertains to higher performance.  The four most popular types of topologies will be discussed here along with their pros and cons which include point to point, bus, star, and ring topology.

The simplest topology you can be listed with is point to point topology where the network is not complex and uses only one single link between two nodes. No barriers, loops or other extensions are required in establishing a point to point network which performs well.

There can be multiple ways a point to point network share information, which are:

This type makes sure the data or signals flowing are in one direction, here one node acts as a transmitter and the other as the receiver.

In this mode, each mode cannot receive at the same but can transmit to other nodes of the network.

In this type of mode, both the nodes in the network possess the ability to both act as a receiver and a transmitter.

Bus topology, as the name suggests, acts as the busses travel and pick their passengers from different assigned points, similar is the process here. This type of topology is mainly used at Local Area Network (LAN) level, and different nodes are connected to one central line, where nodes are acted as bus stops, from where the data is received and passed throughout the central main channel. These nodes can be all the devices connected such as laptops, printers, scanners or etc., and send and receive signals through this main linear channel wire.

The ends of this central wire are connected to terminators which make sure the signals have reached the end and prevents the data bounce. Signal bounce occurs when the data coming from one direction flows along the channels and attempts to move back to the source it came from, creating problems in the computer network. This attempts to reduce the overall performance of the network if in the meantime another signal is sent and they both collide.

This network requires less cost and is easier to be built.

In this type, the network is connected and formed into a star-shape like structure where each device and peripheral is connected to a central hub. The only way the devices can communicate with one another is through the central hub and no direct communication is entertained here. For example; if device A has to send signals to device B, it must first send it to the central hub to be sure that it gets transmitted further to the desired receiver.

This type of network is very easy to build, as it only needs some wires and a central hub to connect the devices. The one main problem with this topology is that if the central hub fails, the whole system will be affected and will stop working. But acts robust in a way that if one link fails, the rest of the system still acts perfect and continues to operate.

All these topologies are well suggested by the names, here the ring means the network creates a circle loop-like structure where each two devices are connected and have one connection from each side.

The communication here is done by sending signals in one direction and it continues to flow until the desired receiver receives it. Each device has a repeater which pushes the signals forward for the next node to be read at. This network is very gentle, as one single link or failure of one device will result in the failure of the whole network. As everything has its pros and cons, this type of topology is easier and cheaper to install but may result in heavy data loss in terms of data traffic issues.

These entire aforementioned network topology types exhibit certain characteristics which prove to be beneficial in some circumstances but may result in a much disastrous outcome if chosen in a different kind of situation. Thus, a good thought must be made before coming up with deciding the type of topology for your network to ensure maximum performance and minimize loss.