What is Natural Language Processing?

The computational technique that helps computers understand human language is called natural language processing (NLP). The computer needs to read, decipher, understand and interpret the human language in a valuable manner. This technique has evolved from an era where processing time has drastically reduced from minutes to a few milliseconds. Today, millions of web pages can be processed by computers in a flash of time. An interaction initiated between human and machine using NLP involves a few simple steps. They are capturing the audio, converting the input audio to text, processing of the data using a particular algorithm; the processed data output is converted to audio and prompted to the user.

NLP uses algorithms to extract meaning out of the unstructured language data. The data which are essential are stored in a form that the computer can understand and use later. The techniques used can be classified into two classes namely

A lot of progress has been made with NLP but still, there is a lot left to explore, understand and improve. Human language is complex and tricky. This makes things difficult for NLP. There is a need for better algorithms to handle this ambiguity in human language. However, some of the commonly used algorithms are discussed below briefly. 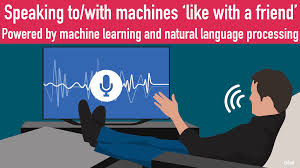