In traditional wireless communication, usually, a single antenna is used at the source and the destination. This may lead to problems with multipath interference, reduction in data speed, and an increase in the number of errors. In multipath propagation, transmitted signal or information bounces off ceilings, walls, and other objects, reaching the receiving antenna at different angles and slightly different times. MIMO technology exploits a natural radio-wave phenomenon called multipath with the transmission of multiple signals (one for each antenna) to overcome problems faced by conventional wireless communication.

It increases the link efficiency, link reliability, and spectral efficiency compared to its previous wireless standards. The throughput of the channel can linearly increase with every pair of antennas added to the system. In any wireless communication, spectral bandwidth is the most valuable commodity, and MIMO is one of the promising technologies that effectively utilize the available bandwidth. Therefore, MIMO has become an integral part of many wireless communication standards, such as Wi-Fi, WiMAX, and long-term evolution (5G LTE). Even, there are many MIMO based wireless routers at homes, offices, and business centres.

There are different forms of it, used in different applications. The most common MIMO forms are discussed below.

MIMO is based on three fundamental techniques: beamforming, spatial multiplexing, and space-time coding. These techniques are utilized individually or in some combination to achieve efficiency measured in terms of lower transmit power, greater range, more noise immunity, or higher throughputs.

Space-time Coding: It is a mechanism that enables the transmission of multiple copies of data over multiple antennas. Further, it improves the reliability of data transfer with similar gains that can be achieved using multiple antenna diversity receptions.  In space-time coding, the signal (data) is mathematically altered to different versions of the same information and transmitted using multiple antennas. Later, the receiver combines all copies of the received signal (data) through different antennas in an optimal way to extract as much information from each of them as possible. It enhances the ability of the receiver to separate the data from the noise. This method uses both spatial and temporal diversity to achieve significant gain. The use of multiple copies of data compensates for channel problems such as fading and thermal noise. 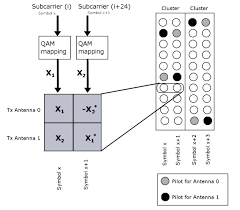 Spatial Multiplexing: MIMO utilizes several sets of antennas to achieve spatial multiplexing. In this technique, a high rate signal is split into a lower-rate signal (streams), and each stream is transmitted from a different antenna operating at an identical centre frequency. The number of receiver antennas must be equal or greater than the number of transmit antennas to faithfully decode each transmitted stream. For example, a 4×4 system (4-transmitter and 4-receiver antenna) can achieve four streams and thus transmit four times as much data over the same channel bandwidth compared to a conventional wireless communication with Single-Input Single-Output (SISO) configuration. The maximum possible number of spatial streams is limited by the minimum number of antennas at the transmitter or receiver. It is a powerful technique for increasing channel capacity at a higher signal to noise ratio (SNR). Spatial multiplexing can also be used for simultaneous transmission to multiple users (MU-MIMO).

Beamforming: It is a technique to create a certain required antenna pattern at the transmitter with an appropriate phase and gain weighting, such that the signal power is maximized at the receiver. Beamforming is achieved by smart antennas that can be divided either into phased array systems or adaptive array systems. The benefits of beamforming are to reduce multipath fading by making signals emitted from different antennas to add up constructively at the receiver and thereby increase the received signal gain. Precoding is necessary when the receiver has multiple antennas to maximize the gain with multiple streams. Precoding requires the knowledge of CSI at the transmitter and the receiver.

This technology in different forms is utilized in almost all wireless communication devices that are being used today. Few significant applications are listed below.