What is Long Short Term Memory?

Long Short Term Memory (LSTM) networks are an extension of artificial recurrent neural networks (RNN) that are designed to learn sequence (temporal) data and their long-term dependencies more precisely than conventional RNNs. These networks can overcome the problem of vanishing gradients and short-term memory of traditional RNN. It is extensively used in deep learning tasks such as stock market prediction, handwriting recognition, speech recognition, natural language processing and others. These networks can remember short-term memories for a very long time, so they are named as long short-term memory.

A single classic Long Short Term Memory unit consists of a cell state and its three gates: an input gate, an output gate and a forget gate, along with other nonlinear functions and pointwise operators. In short, the forget gate decides what is relevant to keep from the prior cell state. The input gate decides what information is relevant to update in the current cell state of the LSTM unit. The output gate determines the present hidden state that will be passed to the next LSTM unit. A pictorial representation of a single LSTM unit and its working is given below. 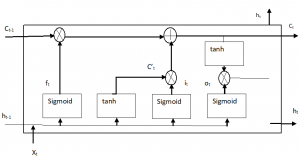 The LSTM variation is in terms of usage of gates to achieve better performance parameters over the basic LSTM. There are many variants of the LSTM network, and a few prominent ones are listed below.

Long Short Term Memory is a kind of artificial neural network and hence needs to be trained with a training dataset prior to its employment in real-world applications. Some of the prominent applications are listed below.