A hologram is an image created virtually by using different beams of light rays and creating a three-dimensional image; perceived real by the human eye. The field which creates holograms is the science of holography. 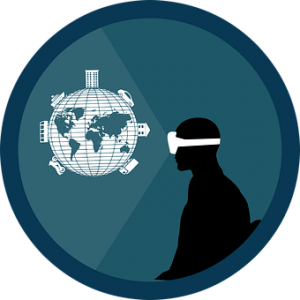 What is Augmented Reality?

Augmented reality also known as AR deals with the process of implementing a composite view via using various states from computer-generated- image mapping on the real world, the way a user views it. The goal of the system is to create a world for the users where the created one is distinct in a way that the difference cannot be identified. It is a very practical field and is used where real life loses are risked, thus training via creating these systems is incorporated.

Here in this article, two fields are mixed and a new way of interaction is composed by creating 3D imagery which is generated from text based descriptions. The idea is reliant upon the nature of all problems that persist in the world. Each problem in the world can be labeled as a problem of recognition. In this article, the proposed system would intake a string or a set of strings, parse out all the identifiable meaningful units, and build 3D models of the said units. Furthermore enhancing the interaction a step beyond is bringing out animations from the digital 2-D plane to a more responsive and interactive 3-D holographic form. This paper brings various implementations of the said system and technology to limelight and proposes to take a calculated and statistically measured leap into the realm of bridging the gap between communication of a human and a computer system, by practically giving the system a metaphysical 3-D structure. 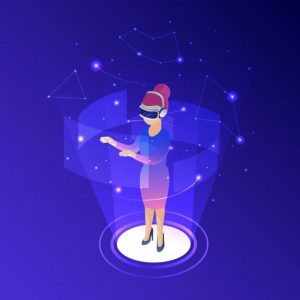 In an era where each and every aspect of our daily lives is going under an astounding restructuring of existing in the digital plane and automation. Thus this introduces the dire need of communication between humans and machines (computer systems) – which in one way or another represent our daily drivers in the digital dimensions. These interactions are vital as predominantly everything is undergoing digitalization and communication is turning inter-plane. The need to have new interaction modes that progressively ekes the productivity of the said interaction between humans and machines. An integral part of the entire process is to make the interaction as natural as possible, in other words, to make it as intuitive and in genuine as it can be.

There were a number of challenges that are prevalent pertinent to the implementation. The primary one amongst those is the data set required for the product to implement its core functionality of creating animations based on the input which constituted various types of categorical identifiers used in it. Another element that is closely linked to the same implementation is the influx of ambiguity present in the semantics of natural languages. These challenges were on the implementation level. Another set of challenges were related to familiarity of any device that implemented the said technology which was used in the project among common populace.

According to a small scale survey, conducted by ourselves, a larger portion of people are not familiar with or have used a device that has the application of virtual or even augmented reality (Holography).

Albeit, a relatively portion of people were at the very least familiar with the existence of a technology called Holographs or holography.

Furthermore people were greatly intrigued and invested with regards to using any such device that implemented holographic display.

Lastly, and in fact the greatest challenge in the project was related to the recreation of 3-D animations generated on the software framework, to the holographic projection that uses the aid of a hardware tool and or device.

Upon analyzing the surveys and the possibility of the various ways in which the technology has already been implemented, it is within the ambit of linear progression pertinent to the fact the idea and/or product will garner a lot of attention from all sorts of populace, not just a particular niche. Additionally, with continuous advancement in technological applications and implementations, as well as, the emergence of new advents of technological fronts, the probability of success on the implementation end increases dramatically. The most important inference point being that holographic interaction is undoubtedly closest to the natural interaction framework thus making it an unavoidable hallmark in the progression curve of communication modes.