What is Hologram Technology?

In simple terms, holography or hologram technology is the next stage of photographic technique that records the light scattered from an object, and then projects it as a three-dimensional (3D) object that can be seen without any special equipment. Various kinds of holograms have evolved starting from transmission holograms, rainbow holograms to the recent 3D holograms. The interesting fact about 3D holograms is that it allows seemingly real objects or animations to appear to float in mid-air or stand on a nearby surface. Moreover, it is visible from all sides which means a user can walk around the display, enabling the realistic-looking image to form.

The original light source is required to view the encoded version of the scene from the recording medium. The laser that is identical to the source laser is used for the reconstruction. The laser beam illuminates the recorded hologram and gets diffracted by the hologram’s surface pattern. This, in turn, produces a light field identical to the captured scene and scatters onto the hologram to reconstruct the object view. The two common types of hologram aerial projection techniques are the computer-generated graphics (CGH) and the spatial light modulator (SLM) technique. A simple block diagram representation of the working principle is given below. 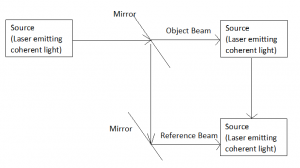 There are three major steps involved in a 3D image reconstruction and the steps are as follows.

Electro-holography can project 3D images aerially without any use of multiple projectors and mechanical processing. A spinning mirror system is also used to project a true 3D image. A high-speed video projector is aimed at spinning mirrors that reflect in all directions, making it possible to view images at any angle in 3D. The interference patterns recorded using single-wavelength light leads to a monochromatic hologram. Multiple interference patterns are recorded with different wavelengths to create a colour hologram. Then, holographic projectors use lasers with different wavelengths to illuminate the corresponding interference patterns for their respective colours.

There are many applications of this technology spanning different sectors. Few application examples are listed below.