What is a graphics processing unit? 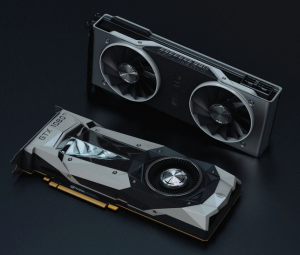 GPU is the acronym for Graphics Processing Unit. As the name suggests, this unit act as the processing unit for all the GUI in a computer system. It renders all the graphics inside a GUI and ensures that all that graphical data is displayed on the screen. Apart from rendering the GUI data, these graphics processing units are also used to do memory–intensive tasks like rendering videos, animations, and CAD tasks.

GPU is also used for multitasking that frees up the CPU’s memory to perform other tasks. The parallel processing structures with thousands of small cores enable the GPU to work efficiently and effectively. Generally, there are two types of GPUs

Integrated GPUs are present inside the CPU, and they share the same memory. However, the discrete GPUs have their own card and separate video memory, also known as VRAM. The latest discrete GPU technology uses the GDDR SDRAM, which is an acronym for Graphics Double Data Rate Synchronous Dynamic Random Access Memory. Discrete GPUs’ performance is always better than the integrated ones due to the separate memory that it uses.

Why Graphics Processing Unit over CPU?

forming an image out of binary data is sometimes needed which is a process. To create a 3D image, we need to first create a wireframe, which is then rasterised. After that, further colors and textures are added to that image, and it is then displayed on the screen. This process is repeated at least 60 times in a single second, which is a lot of work.  CPUs lack specialised hardware for such tasks, and they’re just designed for general purpose processing.

The graphics card has the following 3 main hardware components

Like the main motherboard, the graphics card also has a circuit board with a processor, memory and other components installed on it. This board has its own BIOS chip installed, which stores the card setting and performs diagnostics on startup. Other than that, there is a processor, also known as GPU, responsible for performing all the calculations. On average, these GPUs have more transistors than a standard CPU and have many cores that enable them to multitask.

Due to excessive processing, the GPU produces a lot of heat, and it requires a heat sink to dissipate the heat. These heat sinks are situated on the top of the GPU with one or more fans that direct the heat out of the system. Modern GPU also uses liquid cooling systems for better efficiency and performance. To get the most out of the GPU, the manufacturers use special software to enhance the performance. These softwares include

The FSAA helps smoothen the edges of the 3-D objects on the screen, and the AF allows the GPU to improve the texture of the image, making it crisper.

When the GPU has computed the image, it stores that processed image into the card’s RAM. The image is stored in the form of bits; each bit represents the pixel’s value and its position on the screen. The image is stored in the RAM until it is displayed on the screen, and the part of RAM that holds these images is known as the Frame Buffer. This video RAM is faster than the normal RAM, and the system can read and write on it simultaneously, i.e., it is dual-ported.

The VRAM is further connected to the digital-to-analog converter, also known as DAC. This converter converts the digital signal from the RAM into an analog signal that the monitor/displaying unit can use. Modern GPUs have more than one of these converters to support multiple displays and improve the performance of the card.

Texture Mapping and Render Output are also two major components of the GPU. The texture mapping part is responsible for addressing and mapping the texture on the object. The render output section holds the output from the GPU and assembles it into an image that is to be displayed on the screen. A higher number of render output indicates a higher output rate.

DirectX and OpenGL are two of the most well-known APIs that are used today. These APIs enable the GPU to communicate with other softwares in a much efficient manner. It provides instructions for complex tasks like 3-D rendering and in games, where you need a good frame rate. Games are often optimized according to specific APIs that’s why new games require an updated version of APIs.

GPUs are mainly used in 2 fields

As far as gaming is concerned, the usage of GPUs is quite obvious. GPUs are used for rendering the game’s graphics and for attaining a decent frame rate. Integrated GPUs may work in this condition, but to get acceptable results, a discrete GPU is always the way to go.

In computing, the engineers are required to train models that have a considerable training data set. This kind of training involves a lot of parallel processing, so GPUs are the way to go. All the simple mathematical calculations are directed towards the GPU, and the model is then trained based on those calculations.