It is a digital token (currency units) designed to work as a secure virtual currency created, exchanged, and regulated by its users (nodes) in a decentralized manner. It uses Peer to Peer (P2P) network for communication, cryptographic functions for security, and distributed ledger technology for transaction databases. Anyone is free to join or leave the cryptocurrency system at any time as there are no identities attached to users. Cryptocurrencies are digitally mined by each user for the creation of new digital tokens (virtual money) and also to verify the transaction. Each user can independently verify the entire transaction history as the ledger is shared among all users. This shared ledger consists of a chain of blocks composed of transactions that is regularly updated through the process of mining.

Cryptocurrency Architecture has the following parts

Miners (users) are the most important part of the decentralized cryptocurrency network, and mining is an investment, just like trading. The miners are required to solve a resource-intensive task and this process is called mining. Mining is a brute-force algorithm and is designed to maintain the number of blocks mined per day remains approximately constant. Transactions are validated and appended to distributed public ledger through mining. A malicious miner may create multiple nodes and try to validate an invalid transaction. However, solving resource-intensive tasks makes it expensive for a malicious user to create sufficient false identities to outnumber benign miners and validate an invalid transaction.

Steps involved in the mining are as follows

One-way functions are usually used for mining. The miner generates a nonce and tries hashing them with the hash of the previous blocks until the result follows a structure defined by the cryptocurrency.

Comparison of Traditional, Digital and Cryptocurrencies

The decentralized cryptocurrency is a digital bearer asset in which the user (payer) who controls the respective private key owns a particular amount of cryptocurrency associated with the corresponding public key (payee). They are not bound to a particular location or jurisdiction; the integrated global payment network can be used to transfer irreversible funds all over the world. A community of mutually distrustful users referred to as miners use their computers to maintain the safety, integrity, and balance of ledgers. Compared with ordinary currencies held by financial institutions, cryptocurrencies are believed to be difficult for seizure and censorship by law enforcement due to underlying cryptographic technologies. In cryptocurrency, users are only identified by their public key. Therefore, privacy and security breaches are avoided as no personally identifiable information such as contact details, credit card numbers, and passwords are stored on servers. The legal status of cryptocurrencies varies as some countries have allowed their use and trade in exchange for actual currency, while others have banned or restricted it. Finally, some cryptocurrency systems can also be used for non-monetary use cases such as decentralized domain name registry, computing platform, and time stamping.

Although there are thousands of cryptocurrencies, only important ones are listed below 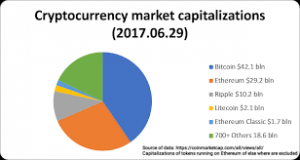